In this post I discuss how you can upgrade a NAS Server by adding Thunderbolt 3 for lightning fast connectivity at 20 or 40Gbps. This particular implementation is specific to an Apple Mac Mini M1 and a Linux NAS server on an older Supermicro X10SRL-F motherboard, but the principles should be the same on similar architectures and operating systems.

I should note that one major caveat to this configuration is that it’s point to point between two computers via Thunderbolt 4 cable(s). The networking functionality of the NAS hasn’t been disrupted or replaced, it’s simply augmented with another communication medium between two nearby computers. Thunderbolt allows for bridge mode, so multiple devices can be connected in series.

This implementation isn’t particularly novel. It is however relatively new and a lot of people that might not otherwise be aware of this approach to fast storage might find it interesting. In particular, people with smaller system disks that are non-upgradable that do Video Editing, people that shuffle VMs in their homelab, et al. There are a lot of existing Thunderbolt Direct Attach (DAS) enclosures (OWC makes some nice ones - no affiliation), but based on my cursory research I wasn’t able to find much that delved into using Thunderbolt’s networking capability to connect to an existing NAS server (albeit point-to-point). I like the idea of having a pseudo-DAS via NAS over PtP Thunderbolt. The Thunderbolt 4 spec includes fiber, so eventually cable distance won’t be a limiting factor.

Because I wasn’t able to find a lot of documentation about the linux thunderbolt interfaces and there are not a lot of user-space tools presently available (Q3 2021), I decided to compile my thoughts and output captures here.

I’m a data hoarder and I still have various data going back a couple of decades. My data consist of email from the late 90’s, old hard disk images, documents, source code, databases, pictures and other digital things I’ve created or collected over the years. Much of it is in archival (old MIDI files, DOS games and similar), but occassionally I will seek something out which often requires mounting a disk image or searching a large file index. As a result, I’m always exploring ways to improve my home computer lab. Plus, I just enjoy pushing the limits of performance.

After upgrading my homelab network to 10Gbps (~ 1,250 MB/s) I was quite happy with the overall performance. However, I quickly found myself upgrading the NAS with NVMe disks and even striping several of them for maximum performance. As NVMe disks and interfaces have gotten faster I’ve found myself saturating a 10Gb ethernet network. Thunderbolt is exciting for several reasons, but most notable for me is the sheer speed and bandwidth capability.

Adding a single 4 lane PCIe 3.0 card to an existing NAS server in a SOHO is a relatively straightforward process. I wasn’t sure that the card I selected would work for a few reasons:

I set aside my trepidation and decided to just try it. No guts no air medal, right?

There is a hardware “hack” involved with implementing this card in an older motherboard. Fortunately, it’s an easy one and the card vendor provides almost everything needed in the box. I haven’t delved into the software override functionality yet, so this hardware modification may not be necessary at all, YMMV.

What’s notable about this configuration is that the motherboard doesn’t have a Thunderbolt (tbt_3 or tbt_4) header and there are no special CPU / chipset requirements. It’s just an Intel Xeon based motherboard/cpu combination with a Gigabyte GC 2.0 Titan Ridge PCIe Thunderbolt 3 card.

I used the work ‘hack’ lightly above. To get a server without a dedicated thunderbolt header to see the PCIe card, you need to short pins 3 and 5 together like this: 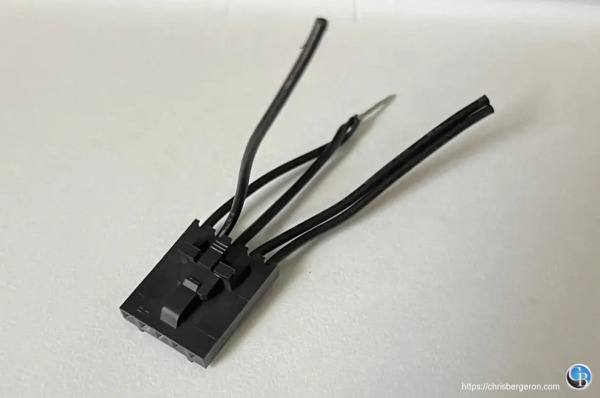 In effect, this tells the card that it’s plugged in. The THB_C port on a “Thunderbolt™ Enabled” motherboard may provide extra DisplayPort capability. More information about the TBT Motherboard header and pinout can be found below.

All I know is that if you get this card and it doesn’t appear in your device list, you may need to short these two wires. I take no responsibility for anything that happens if you do this and something bad happens - please research accordingly.

Now that the card is installed and internal cables are connected it’s time to power up the NAS Server.

This host is a Linux server. It’s running on a Supermicro X10SRL-F motherboard with an Intel Xeon CPU. The chassis’ are two Supermicro 836A. One chassis is the NAS server, the other is a DAS (Disk shelf) attached to the NAS for a total of 32+ removable disk bays.

After powering up the NAS server we can see the Titan Ridge card using lspci:

We can see more information in the /sys/bus/thunderbolt kernel syspath. This is the output prior to connecting a thunderbolt cable to another host:

… and we can view the relevant kernel message buffer lines (log) with dmesg:

Interestingly, we can also see that the Mac Mini is immediately auto discovered and that the thunderbolt0 network interface has become available. I thought I would have to start the kernel module (driver) for thunderbolt-net, but it looks like it happened automatically.

After the network device becomes available we can address and configure it using standard userspace tools. I use good old ifconfig to set a non-link-local (not automatic 169.254.x.x) IP address for the interface. Using ip addr or other userspace tools (GUI) should work just fine.

Now that the interface has an IP, we have to add a static host route entry for it to communicate:

Next, we just need to set up the Thunderbolt routeable IP on the Mac.

The other host in this setup a Mac Mini. Thunderbolt 4 is not a requirement for this setup and neither is Apple Silicon. Thunderbolt is an Intel™ Specification and any hardware that has license from Intel should work equally well. This host is running MacOS Big Sur / Monterey.

Here we can see the new network service(s) that came up after connecting the Thunderbolt cable between the machines - Thunderbolt Ethernet Slot 1 and Thunderbolt Bridge:

Much the way we set an IP on the Linux host, we will do the same thing on the Mac. You can set the IP of the TB interface however you want. Either via the command line with posix tools:

Or, using the UI: 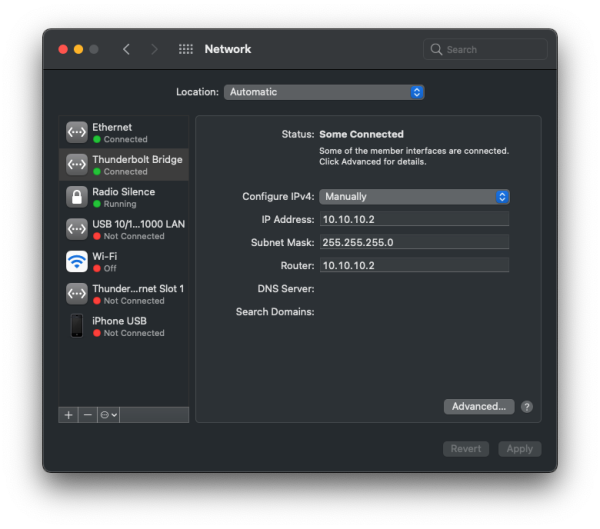 This is probably the part of this post that you came here for.

To benchmark the connection speed I used iperf3 so that disk I/O isn’t a variable. Even though I’m using tiered storage including NVMe’s on the NAS server, at this point I’m just interested in the connection capability. Here are the results from iperf3 -s on the Mac mini:

I know that Thunderbolt 3 and 4 are rated at 40Gbps:

Interesting. It’s almost exactly half of what I expected. Could it be that it’s operating at half duplex? 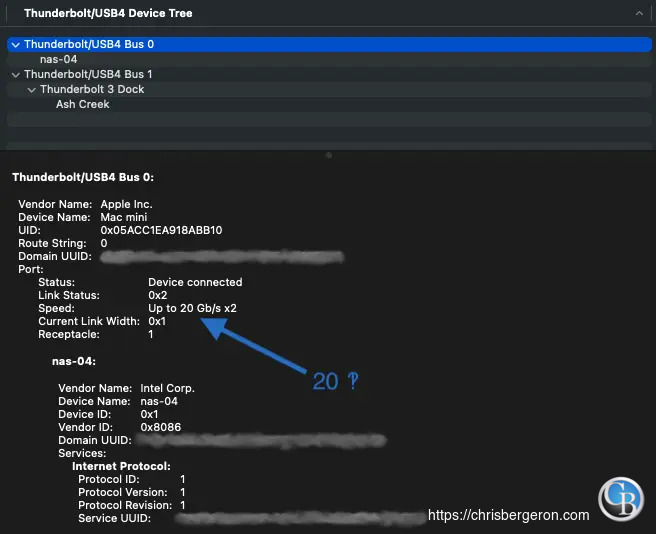 To dig deeper I decided to try transmitting and receiving simultaneously. In theory, I should get ~17Gbps from each server as both a sender and receiver for a link saturation around 34 Gbps. Let’s see what happens: 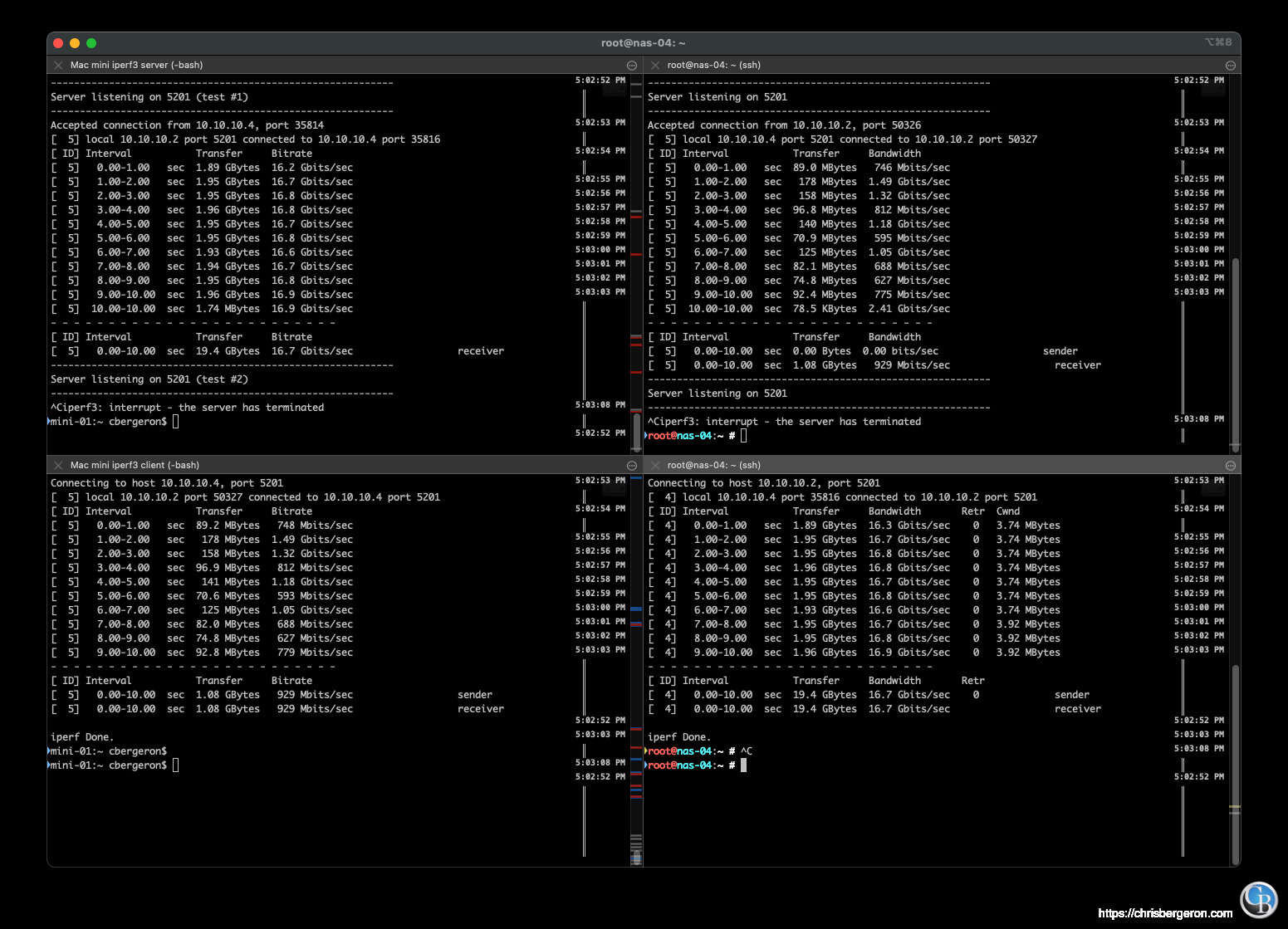 Well damn. I’m not quite sure what to make of this. (Please comment below if you have any insights)

To further reduce the equation I tried to test speeds between two Macs over Thunderbolt (both M1 processors, both Thunderbolt 3) to see if there’s an issue with the PCIe Ridge Titan card or the cable. One is a 2020 Macbook Air, the other is the 2020 Mac Mini.

Better, but not by much. It’s 20Gbps, not 34Gbps. Thunderbolt is 40Gbps but I’m only seeing half that. I know I don’t have a PCIe bottleneck because Thunderbolt uses 4 lanes of PCIe 3.0, which it has (dedicated).

When I look at the link speed, I can see that the link between the two Mac’s over Thunderbolt is 40Gbps: 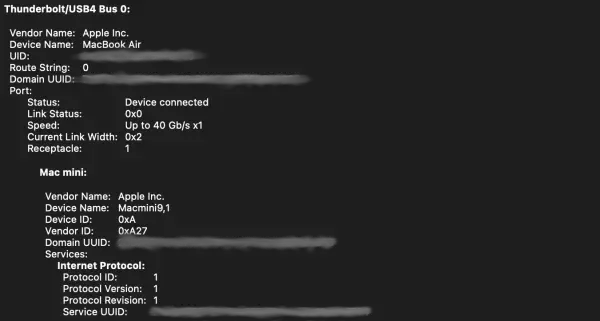 So, that’s as far as I’ve gotten thus far.

It just occurred to me that Thunderbolt 4 is guaranteed 40 Gbps. Thunderbolt 3 is not. Remember how I mentioned STANDARDIZATION at the beginning of this post as the only major difference between TB4 and TB3? Perhaps total throughput is as well.

This information is not authoritative but I’m providing it here for reference. This table illustrates what I believe the pinouts are:

The consensus appears to be that 5 is power, 1 is ground and these two should never be shorted together. Based on the schematic of the Alpine Ridge card, a few things are confirmed: 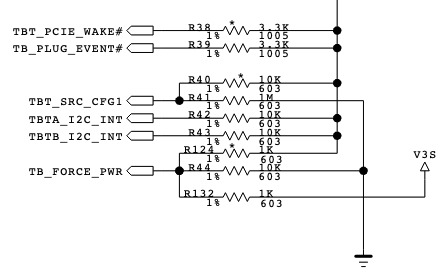 It’s important to use Thunderbolt 3/4 cables and not just any USB-C cable because there are many types of USB-C cables. USB-C is the form factor of the connector. That’s it. The connector. It’s not even wire compatible. Some cables only connect power wires (charging cables).

Thunderbolt 4 is a regorous specification by design. The primary benefit of Thunderbolt 4 over Thunderbolt 3 is not performance - it’s STANDARDIZATION. If you buy a Thunderbolt 4 device, it can only receive the offical Intel™ Thunderbolt™ 4™ Certification™ if it complies with all* of the protocol specs. I kid about the numerous Trademark symbols (™), but Intel and Apple have done everyone a favor here. Thunderbolt 4 is designed to reduce the confusion that USB 3 and USB4 have.

Currently, in the USB-C form factor there are USB-C Charging cables, data transfer cables, multi-purpose cables, low-speed cables and 10Gbps and 20Gbps cables. If you’ve ever shopped for a USB-C anything on popular sites like smile.amazon.com, you’ll see marketing bar graphs that show how fast USB-C is. Well, USB 3.0 is. Well, USB 3 Gen 1, not USB 3.0. Actually - even faster is USB 3 Gen 2 (USB-C). If the cable isn’t used in a USB hub. Or if it is, it has to be connected to a Powered USB 3.x Dock.

Thunderbolt 4 will hopefully do away with all of that (but with a higher price tag). 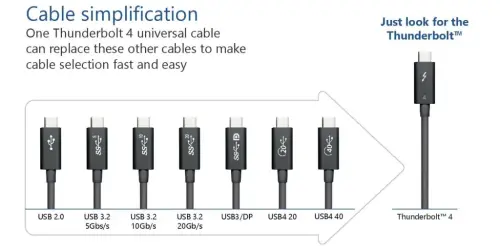 USB 3.whatever and USB4 protocols can run over Thunderbolt, but not the other way around.

You may lose functionality if your motherboard doesn’t have a Thunderbolt header and you use the workaround I indicated above (shorting pins 3 and 5). Specifically, the ability to cycle the cards power from Linux since we’re forcing the board ‘on’.

Much thanks goes to Mika Westerberg @ Intel for the linux kernel work along with everyone at LKML that worked on it. Also, karatekid430 for his excellent resources on Thunderbolt in the kernel guide 2019-11-12.pdf
Christian Kellner - for his excellent work on the Thunderbolt Linux userspace utils and presentations. Please visit his blog and like or follow him if you’re interested in more about Thunderbolt on Linux.
https://christian.kellner.me/2018/04/23/the-state-of-thunderbolt-3-in-fedora-28/

And of course Apple™ and Intel™ for joining resources for this specification - even if only for a brief period of time.

If you’ve enjoyed this post, please follow me on twitter and/or leave a comment below. Is there anything I should try? Increasing the transmission MTU perhaps? Or maybe you know why I get strange speeds when I TX and RX simultaneously …